Last Saturday I ran the third of four 5Ks in the Athlete’s Closet Winter Series.  Coming off of a month of slower trail runs, time in Vegas and really no speedwork to speak of, it was not surprising that I finished Saturday’s 5K much slower than my January 5K time from the exact same course. 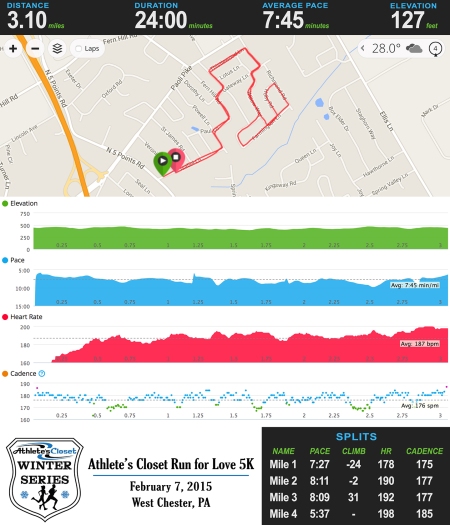 I started out a little too quickly (ok, a LOT too quickly!) and then faded pretty significantly towards the end of the race.  I felt OK the entire time (well, until I looked at my watch after mile 2 and saw 8:11!) but I just couldn’t make my legs go any faster.  My finish time of 24:00 was 13 seconds slower than January’s AC 5K but, surprisingly, was still good enough for 3rd woman overall and top in my age group.  I guess we’re all getting a little slower as winter drags on!

Despite my lackluster performance I left the race with renewed determination.  I want to beat my course best time of 23:47 during March’s Athlete’s Closet 5K and I know I can do it!  I drove home feeling excited by the prospect of resuming speedwork (crazy, right??!) and found myself looking forward to picking up the pace on training runs.  The final Athlete’s Closet 5K in on March 7th and I am going to be ready for it!!

I have four weeks to work on my speed.  I kicked things off Monday with 5 miles on the treadmill while watching Seven Years in Tibet.* Then things really got going on Tuesday with my first speed workout since before Thanksgiving: 6 x 800m intervals on the treadmill with 400m jog recovery in between.  3:42, 3:41, 3:37, 3:35, 3:32, 3:25… I CRUSHED this workout with a better average pace than I ever ran on the track last Fall.  After a nice cool down I climbed off the treadmill more determined than ever.

*Side note: I last saw Seven Years in Tibet when I was 13.  It was SO much better to watch now! Fascinating 1940s history plus young Brad Pitt. 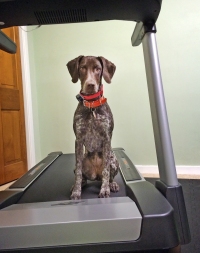