Last Saturday I ran the third of four 5Ks in the Athlete’s Closet Winter Series.  Coming off of a month of slower trail runs, time in Vegas and really no speedwork to speak of, it was not surprising that I finished Saturday’s 5K much slower than my January 5K time from the exact same course.

I started out a little too quickly (ok, a LOT too quickly!) and then faded pretty significantly towards the end of the race.  I felt OK the entire time (well, until I looked at my watch after mile 2 and saw 8:11!) but I just couldn’t make my legs go any faster.  My finish time of 24:00 was 13 seconds slower than January’s AC 5K but, surprisingly, was still good enough for 3rd woman overall and top in my age group.  I guess we’re all getting a little slower as winter drags on!

Despite my lackluster performance I left the race with renewed determination.  I want to beat my course best time of 23:47 during March’s Athlete’s Closet 5K and I know I can do it!  I drove home feeling excited by the prospect of resuming speedwork (crazy, right??!) and found myself looking forward to picking up the pace on training runs.  The final Athlete’s Closet 5K in on March 7th and I am going to be ready for it!!

I have four weeks to work on my speed.  I kicked things off Monday with 5 miles on the treadmill while watching Seven Years in Tibet.* Then things really got going on Tuesday with my first speed workout since before Thanksgiving: 6 x 800m intervals on the treadmill with 400m jog recovery in between.  3:42, 3:41, 3:37, 3:35, 3:32, 3:25… I CRUSHED this workout with a better average pace than I ever ran on the track last Fall.  After a nice cool down I climbed off the treadmill more determined than ever.

*Side note: I last saw Seven Years in Tibet when I was 13.  It was SO much better to watch now! Fascinating 1940s history plus young Brad Pitt.

Hello blog world!  As July winds down I wanted to share some of the things we’ve been up to this month.  So, without further ado, here I go!

1.  We have a tiny house guest who snorts occasionally. (OK, a lot.)

Meet Spencer.  This feisty little pug belongs to Matt’s sister and her husband and he’s staying with us for a few days.  He has quite a personality and is constantly snorting and sniffing his way around the house and yard.  Quite a difference from the big GSPs and labs that I am used to!  There are more photos of this little character at the end of the post if you haven’t gotten your fill of pug pictures yet.

Spencer and Matt stare each other down

Spence and the flowers

2. I chose to run 22 laps around a track yesterday.

Yup, that’s 5.5 miles in case you were counting.  Yesterday I must have gone crazy because I voluntarily joined a running club for their weekly speedwork at a local track.  This was my first time running on a track since 2007 and boy, was it different than running a hurdle workout!  The goal was to run the intervals at 5K pace and I actually did that surprisingly well, but apparently an 8 minute 5K pace is pretty slow because even the slowest of the women lapped me at least once during the workout.  But, I guess that’s why I’m trying speedwork… to get faster!!! 🙂  I’m not sure yet but I think I might just go back next week.

Did I mention that Matt and I have been crazy busy with housework and yard work since May?  That’s because we knew we were hosting a huge fiesta-themed bridal shower for our awesome soon-to-be sister-in-law and we wanted to get everything looking good.  “Looking good” included a complete overhaul of our front walk landscaping, tons of gardening, repainting and steam cleaning the room that used to be Bailey’s hangout, and a multitude of other self-imposed tasks around the house.  It all came together perfectly on Saturday when 50+ people arrived for the shower.  (That’s a lot of people, by the way.)  The party was a blast but I’m also kind of excited that it’s over… now I might actually find some time after work to sit down and relax! (Or, you know, blog!)

House decked out for a party!!

Way back in November I learned that Bailey was chosen to be featured in Purebread Deli‘s 2014 Calendar.  Purebread is a local bakery/cafe that has a dog theme and as part of winning the contest we got a free calender full of dog photos and coupons.  Bailey was named “Miss July” so her photo has been gracing the wall of my cubicle at work all month.  It’s hard to believe that she has been gone exactly 6 months today.  Matt and I still miss her a lot but we are at least fortunate to get to spend time with the other dogs in our family like Spencer, Bella and Hershey.
(The calendar photo was taken at a DockDogs event in 2012 – you can read about it in this post if you’re interested.)

And now, as promised, here are more pictures of Spencer.  He’s pretty cute, right?  🙂  Have a great night! 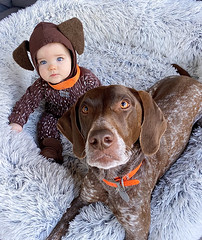