Yesterday afternoon I ran the St. Tim’s 5K and I won!!  Granted, it was a very small race (33 participants) but I was thrilled to lead from start to finish and take home the gold!  🙂 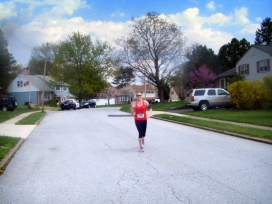 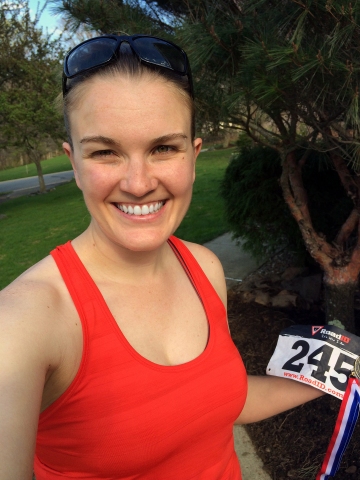 Going into this race I had high hopes.  I was under the impression that the course was flat (it wasn’t) and the sunny 70° weather was perfect for running, so I was hoping for a PR.  With that in mind I exploded off the start line, eager to get into a good position to get around the first narrow turn out of the parking lot.  To my surprise, no one else seemed to be running with me and before I knew it I came to the first intersection and realized that I had no idea where the course went.  Luckily the course was arrowed and a police car was clearing the way ahead with its lights on, so after my initial confusion passed I excitedly took off alone in the lead.

The combination of the unfamiliar lead position and my amped-up expectations made for a very quick first mile (7:34).  Just as I was deciding that I might have gone out a little too fast I arrived at the bottom of an ENORMOUS hill.  (So much for the flat course!!)  I trudged up the hill at a slow jog and figured that someone would certainly be passing me soon after my sudden deceleration.  But no one came.  I didn’t want to turn around and look, but I could hear the spectators cheering me on and I tried to listen after I passed to find out if they were cheering for someone close behind me.  It wasn’t until the last 1/2 mile that I finally heard someone say “they’re right behind you!!” so I tried to make my tired body move a little faster.  Finally with about .15 to go I realized how close I was to victory and I finished strong.  Woohoo! 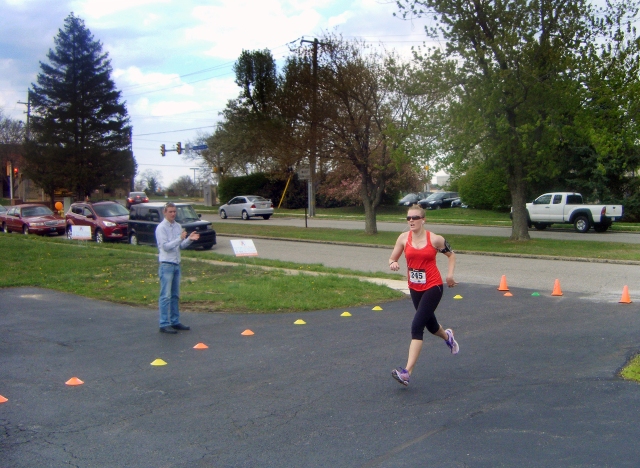 Overall it was very exciting to win a race but I know that I could have run faster if I had paced myself a little better.  I need to get more disciplined about my starts… a 7:34 first mile doesn’t do me any good if it makes me so tired that I slow down to ~9:00 pace for the rest of the race.  (Although maybe in yesterday’s race the fast start actually did help because it put me so far in the lead that it was mentally harder for anyone to pass me later on??)  Either way, running a more consistent race (or even – gasp – negative splits???) is definitely going to be something that I work on moving forward.  Look at these ugly splits from yesterday… eek!

My next race is the Elwyn Maximum 5K next Saturday.  Apparently the Elwyn course is a mixture of roads and hilly trails so I think that it will be a great opportunity for me to chill out and focus on running a more even-paced race!

Thank you to DD, a kind spectator who took the two photos of me during the race and who was kind enough to email them to me!