Last Saturday I ran the final 5K in the Athlete’s Closet Winter Series.  After a lackluster finish at this event in February my goal was to beat my previous course-best time of 23:47 from January.  I worked hard during the weeks leading up to Saturday’s race and I was fired up and ready to run FAST!

Unfortunately I did not get a chance to better my official course time.  Just before the race began the race director announced that the course had to be cut short due to snow and ice on a section of the road.  😞  On the bright side, he reminded us, we’d all get automatic PRs for running a 5K “minus a little bit” so at least I had that going for me! 😉  Ultimately the shortened course really wasn’t that bad but I’ll admit, I was sad to miss my chance at an official course PR after a month of hyping myself up!

Even with a short course I could still try to run my fastest pace of the series.  I couldn’t remember exactly what a sub 23:47 5K translated to in terms of pace so I focused on trying to stay in the mid-7:30s.  The first mile ticked by feeling relaxed, controlled and, dare I say it… easy in 7:22.  7:22!!! Whoops, a little TOO fast.  But I felt good so I rolled with it.  The second mile chirped by in 7:47 and I reasoned that I was pretty much on target with an average pace right around 7:35.  With less than a mile to go all I needed to do was hang on… 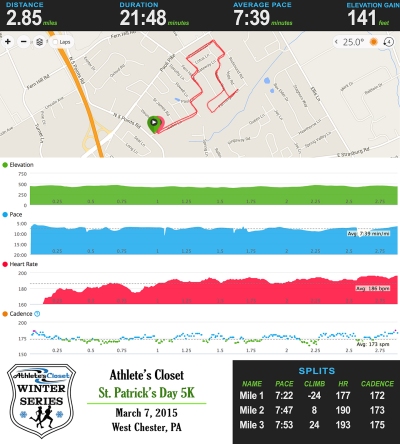 According to Garmin I slowed down a ridiculous amount on the final uphill stretch (I think that’s a technological glitch… I have no recollection of that!) but I still managed to squeak through the finish in 21:48.  The race distance was 2.85 miles and my average pace was 7:39.  Was that good enough to beat January’s pace…..??  It turns out that YES, it was!!  If the course had been the full length and IF (big if) I had kept up the same pace, I was on track to run a 23:42 5K… 5 seconds faster than my January time on this course!  Woohoo! 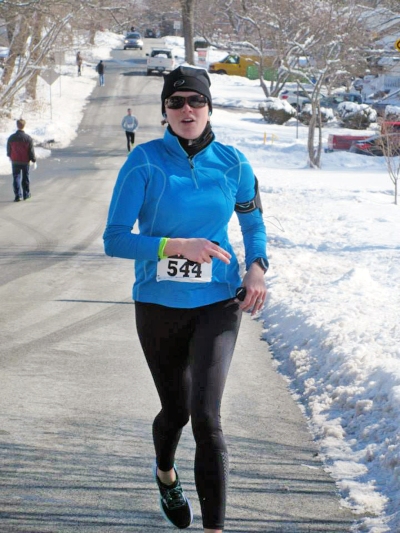 Seconds before crossing the finish line.  I think I’m preparing my fingers to turn off my watch.  Photo credit: Athlete’s Closet.

My finish time was good enough for 10th place overall, 3rd place woman and, for the 4th time in the race series, 1st in my age group. 😄

Before the race I promised myself that if I ran fast I could buy my first-ever pair of trail running shoes.  I think 7:39 pace qualified as fast so a few hours after the race I picked up these beauties: 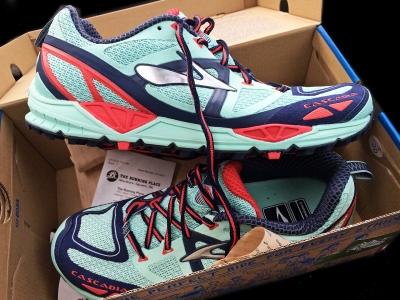 Brooks Cascadia 9s.  They’re last year’s model which means that they were on sale!  I took them for a spin on Sunday at Ridley Creek State Park and they were nice and comfy despite the treacherously slippery slush and snow.  My GSP trail-trotting buddy approves! 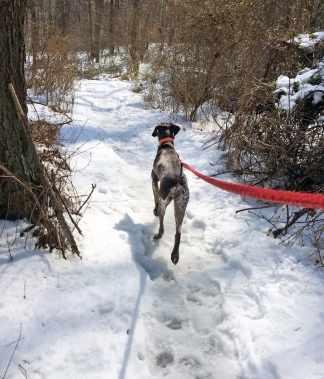 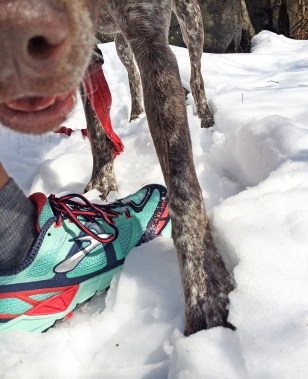 Piper approves of my new shoes

The next race that I’m registered for is the final Pickle Run on March 28th.  I have a feeling that that won’t actually be my next race though… I’m pretty sure that I’ll be signing up for either a St. Paddy’s Day 5K this weekend or a 10K trail race on the 21st.  Or both.  We’ll see!  😄