I ran a 5K PR last night at the Haverford Twilight Run and I am one happy runner!!!  My previous PR of 23:32 was set on November 1, 2014.  That was TWELVE 5Ks ago. (Plus two 10Ks, one 5 miler, one 2 miler and one trail race… I like racing, what can I say?).  In four of those 5Ks I crossed the line within 9 seconds of my PR time, but the elusive new record remained just out of reach until last night’s race.

I did not go into the Twilight Run thinking that I was in a position to PR.  After last weekend’s problematic 5K (terrible first mile pacing leading to my slowest 5K in months) the Twilight Run was my last chance to try to get my pacing under control before next weekend’s 10 mile Broad Street Run.  I signed up for the race on Wednesday with this sole purpose in mind and set two very firm goals for myself:  Run the first mile in 7:36 or slower and run one of the remaining two miles faster than the first mile.

Saturday’s weather was perfect: 57° and sunny.  The evening’s festivities kicked off at 5PM sharp with a kid’s mile challenge and I felt relaxed and happy as I watched all of the kids finish their race with huge smiles on their faces.  Then it was time for the 5K to start.  There were around 180 runners and I purposefully picked a starting position much farther back in the pack than I normally would, hoping that this would keep me from getting caught up in the excitement of the first mile.

Usually when the gun goes off I blast through the start, then spend the next few hundred yards dodging and weaving and generally running way too fast.  But not last night.  Nope, the gun went off, the crowd around me slowly moved into a jog, and I started my watch when we eventually meandered across the start line.  I fell into stride behind a group of runners and resisted the urge to zip around them.  I saw Matt about a quarter mile in and was feeling so relaxed that I goofed off for the camera (from too far away for the iPhone photo to turn out, unfortunately) before taking a leisurely right turn onto Darby Road.

The course was basically a big loop with two turnaround points.  I kept my pace very controlled through the first turnaround (about .65 miles in) and then sped up slightly as I doubled back towards the starting point where Matt was cheering.  Just as I passed Matt my watch beeped the first mile… 7:32.  A tiny bit faster than I was hoping for but overall much better than last week’s wild 7:16 split!

I cruised along during the second mile, focusing on my running form and cadence and clapping for the leaders as they passed on their way back to the finish.  I didn’t look at my watch until just after the second turnaround when it beeped again… 7:23.  WHAT?!??!  I was shocked.  That is the fastest second mile I have ever run.  WOW!  I realized at that point that I was absolutely on track for a PR.  All I had to do was keep up a reasonable pace for the third and final mile.

The third mile was hard work.  I really pushed myself and looked at my watch a lot to check my average pace for that mile (a feature that I love on my Garmin!)  I kept an eye on the road ahead, hoping to see the library on the corner which marked where I would get to turn towards the finish.  I knew if I could just get to the final quarter mile straightaway I would be able to hang on.

Mile 3 beeped by in 7:38 (I did it!!) but by then I was running too hard to really process the split.  I could barely see the finish line clock, then realized that it was quickly ticking away through the 23-teens.  I ran harder and watched the 20s go by and then blasted across the line just as the clock struck 23:32 (my old PR), making sure to hit my watch as I crossed.

My official finish time?  23:25!!!  Yep, my super slow start not only helped me run a faster second mile, it also gave me 7 extra seconds of clock time to work with!  Double win!!

My new PR time was good enough for 39th overall, 10th woman (with 5 of the females ahead of me being teenagers!), and 2nd in my age group.  Woohoo!  I ate a celebratory banana and ran a cool down, then Matt took me out to Iron Hill Brewery (my favorite) for a PR dinner. 😄

At the Twilight Run I learned that it is possible to start a race “slow” and still have energy to speed up later in the race.  I also learned that it’s much more pleasant to run a faster second mile and pass people than it is to slow down in the second mile and feel like you are losing ground.  After last night’s PR success I am looking forward to putting these lessons to use on Broad Street next Sunday.  One week to go! 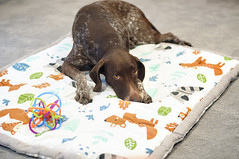