Good morning! Well, by the time I post this blog it will probably be evening, but I am typing this from the car at 6:54am on Sunday morning as Matt and I are heading out to Wisconsin on a very important mission. I’ll tell you more about that in my next post! 🙂

Today’s post is a recap of the DelCo SPCA’s Bark in the Park 5K that I ran on Saturday at Rose Tree Park in Media, PA.  As the name implies, this was a dog-friendly event and runners were encouraged to race with a dog. I originally planned to run with Matt’s parents’ super-speedy GSP, Bella, but Bella wasn’t available so I switched things up and ran with Hershey the chocolate lab instead. 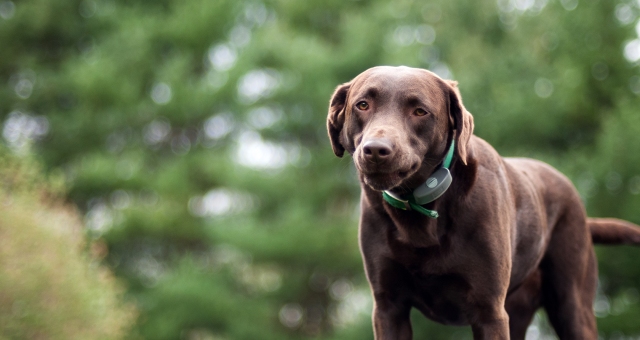 Hershey is a sweet, loving 4 ½ year old pup who is extremely laid back and eager to please. She is not a runner (she’d much prefer to sleep all day!) so I was a little apprehensive about taking her to a 5K.  I ran a mile with her the day before the race to make sure that she could physically run and then showed up at the race Saturday morning hoping that she was ready to go!

When the race began Hershey shot out of the starting area with an uncharacteristic pep in her step and we happily ran our first mile together with her heeling impressively well at my side.  Good girl, Hershey!  Then the second mile came around and Hershey realized that this was not just a short jaunt in the park.  She slowed down significantly and by the second lap around the park’s cross country course I was running with my left arm extended out behind me, giving my running buddy an encouraging “come on, Hersh!” every minute or so.  Hershey never wanted to flat out stop but it was very clear that she had a different idea of what a comfortable 5K pace was.  Oh well!

We dragged our way around the second lap and focused on dodging the participants of the 1 mile walk that had started at the same time as the 5K.  The walkers took up an enormous amount of space on the course with their dogs wandering around at the end of their leashes, seemingly oblivious to the fact that a race was going on at the same time on the same course.  I don’t know how this could have been remedied, but it was certainly not ideal, especially since I had a dog of my own which made dodging the walkers that much more difficult.

After about 21 minutes Hershey and I finally came into view of the finish line but we weren’t done quite yet (much to Hershey’s chagrin).  We ran past the finish and followed a poorly marked loop up and down a few more hills before turning back to finally cross the line.  We finished in 26:25*, good for 18th place overall out of 155 runners and 4th female.  I don’t know how many dogs were ahead of us but I think Hershey did a great job in her first 5K!

*The official race time clock was ticking away in the 29s when I finished and, according to the official results, my time was 29:32. I had both a stopwatch and Runkeeper recording my 26:25 finish so I am positive that the official time was not correct!

The Bark in the Park event benefited the Delaware County SPCA which is a great cause, but the 5K was poorly managed and I probably won’t go back next year. The race started 20 minutes late, parts of the course were virtually unmarked (especially that last loop to the finish), and the combination of the 5K runners with dogs trying to pass through the mob of oblivious walkers with dogs during the second lap of the course was just crazy. All of this plus the wildly inaccurate timing made Saturday a strange racing experience. Luckily, I was running purely to have fun and I think Hershey and I definitely accomplished that!! 🙂