It’s a brisk 21° here in Pennsylvania this morning but it still doesn’t feel like this weather is actually cold after our October trip to Yellowstone. Day 4 began in frosty Canyon Village with temps in the single digits. Matt and I were getting used to being outside in the cold by Saturday so honestly the hardest part was just sitting in the rental car waiting for it to defrost enough to make the short drive to the dining hall building. (Then, unfortunately, the breakfast of french toast and strata at Canyon’s cafeteria was cold, soggy, and flavorless, but I’ll address the park food later!)

Lackluster meal behind us, Matt and I headed up to Artist Point once again to gawk at the massive Yellowstone Canyon and Lower Falls in the distance. This time we were prepared with Yaktrax on our hiking boots which made the short but extremely icy walk to the lookout feel much safer.

Next we drove back down South Rim Drive towards Uncle Tom’s Trail, a steep stairway down to the base of the Lower Falls of the Yellowstone River. We were excited to see that our car was the only car in the parking lot – what luck!! But the reason soon became apparent… Uncle Tom’s Trail was closed. At the time we figured this was due to snow/ice on the stairs* so, emboldened by our Yaktrax, we started along the snow-packed trail towards the lookout point, curious to see how far we could get.

The beginning of the trail was fine, but what was not fine was how isolated we felt the moment we started hiking away from the parking lot. We had become accustomed to having a few other tourists around us at all times but this trail was lonely and silent. We thought about all of the “BE BEAR AWARE” warning signs we’d seen around the park and decided to turn back. Just as we arrived back at the parking lot we noticed a couple hiking towards us. I asked them if they were also heading towards Uncle Tom’s Trail and, when they replied that they were AND that they had bear spray, we promptly turned around and headed back towards the waterfall with them.

We had fun chatting with our fellow hikers as we journeyed up the south rim trail. We stopped at overlooks to snap pictures of the waterfall below, but we never did see the actual turnoff for Uncle Tom’s Trail. (Probably because the trail was buried under a few inches of fresh snow!) In the end we found ourselves up at the Artist Point parking lot once again, so Matt and I peeled off to return to our car via the road while our newfound friends continued on to see the famous overlook for themselves.

After lunch at the Canyon Village General Store we drove south to explore the Hayden Valley and mud volcano. The mud volcano area was home to one of the coolest thermal features we saw (and heard!) on the whole trip: Dragon’s Mouth Spring. The spring is inside a cave that constantly spews a column of steam out into the basin around it. The best part was the ominous low rumbling sound that accompanied each “dragon’s breath” of steam. Click below for a video. 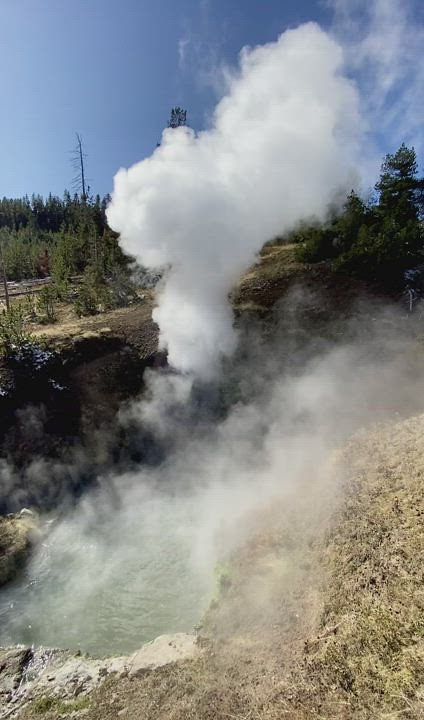 Our next stop was Lake Village on the shore of the massive Yellowstone Lake. We drove by the Lake Lodge (closed for the season) and stopped by the visitor center before soaking up some sun at the edge of the lake. By this point it had warmed up to the 30s which felt downright balmy compared to the weather we’d experienced for the past few days.

We enjoyed the drive back north along the Yellowstone River before again feeling the pull of the Grand Canyon of the Yellowstone.  As the sun was getting low in the sky we visited the canyon one last time, this time on the north rim with stops at Lookout Point, Grand View and Inspiration Point.

Although the day ended on a high note scenery-wise, the food was, once again, not the strong point of the trip.  We’d been exclusively eating park food since Thursday and by dinner on Saturday that was starting to wear on me. This was the last night Canyon Lodge was open for the year and several items on the limited menu were already unavailable or running out as we waited. (For example, they ran out of penne partway through making Matt’s entree and brought him a tiny portion of chicken-sausage pasta that was also missing the sausage because they ran out of that, too!!) I understand that it was the last night of dinner service so obviously the restaurant didn’t want to have excess food left over, but after several meals in the park I was ready to get out and eat some “real” food made with fresh ingredients. More on that in my recap of Day 5!!

*Now that I’m home and have the internet at my fingertips I realize that Uncle Tom’s Trail is actually closed for a large scale maintenance project, not because of conditions on the trail in October.