Yesterday Matt, my brother Billy, his girlfriend Suzanne, and I ran the Run for Ryan 5K at Victory Brewing Company in Downingtown, PA.  The four of us were team “Red, White and Brew” and we had a blast running and enjoying BBQ and Victory beer after the race. 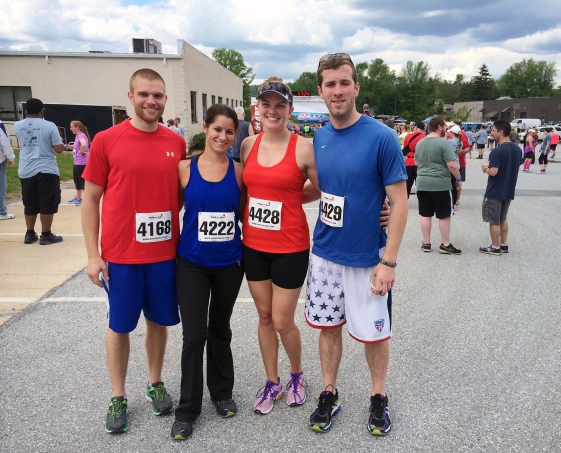 I’ve been gearing up for this 5K for months (I signed up for it in early January) and it’s been my unofficial goal race all Spring.  This was my wishlist plan going into the race:

Lofty goals, I know, but I have been working hard and I knew this course was going to be fairly flat (a rarity around here, apparently!) with a very exciting, fun atmosphere.  I also had just come off of a super strong training run at Ridley Creek on Friday where I had shocked myself with huge negative splits (8:45, 8:11, 7:30..!) and a positive experience at the Elwyn 5K where I really concentrated on taking it easy during mile 1 so that I’d have some juice left for the rest of the race.

The subject line probably tipped you off to the fact that I ran sub-25 so I’ll just tell you right now.  My official chip time was…

That’s nearly a MINUTE faster than my previous personal best!  I was (and still am!) thrilled!

During the race, however, I was pretty worried that I had (once again), gone out at a pace that was way faster than I could maintain.  The race began just fine and I felt like I was succeeding with Part 1 of my plan as I settled into what felt like  a comfortable, easy pace for the first mile.  In fact it felt a little TOO easy and I thought I might have chilled out a little too much, until Runkeeper cheerfully reported that I had completed my first mile in 7:42.  Yup, almost 45 seconds faster than I planned to run.  Crap!  As I started to mentally chastise myself for going out too fast I realized that I still felt inexplicably good.  I put the first mile behind me and instead focused on trying to keep that pace up for my second mile.

The moment Runkeeper reported my second mile split – 7:54 – I knew that I was definitely going to get a PR.  I had 1.1 miles go and only needed to complete them in ~9 minute pace to beat 25:13.  Woohoo!  I hadn’t run my second mile quite as fast as the first but amazingly I had maintained a sub-8 pace and still felt good.  With renewed energy I pushed into my 3rd mile and back towards the brewery.  (Oh yeah, did I mentioned that there was free beer waiting for me at the finish????)  With about 0.3 miles left to go my abdomen started to cramp up, but I knew that I was on pace for a big PR and I tried really hard not to slow down.  Runkeeper reported my third split – 8:00 – just before I came around the bend and into view of the finish line clock that was slowly ticking its way through the low 24’s.  I sprinted as fast as I could and finished with an official chip time of 24:17.  Victory!!!!!

Our entire team finished with PRs, with Billy coming in 39th overall, Matt finishing with a new personal best time of 23:47, and Suzanne completing her first 5K ever!  I finished 101/644 overall, 25/344 women, and 5/58 in my age group.  Woohoo!  As part of our race entries, we all got free BBQ sandwiches and 2 beers each.  Matt had a lacrosse game immediately following the race so we all generously helped him drink his beers.  🙂 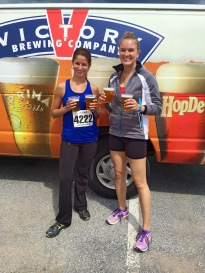 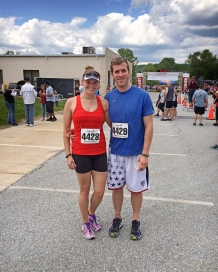 Annie and Matt at Victory

It was really nice to run with Matt, Billy and Suzanne (and to have my mom cheering and snapping photos from the sidelines!) and I am super psyched that I was able to crush my time goal (even if I wasn’t so successful at running negative splits!).  It was also quite enjoyable to kick back and drink a few beers in the gorgeous 65° weather after the race. 🙂

My next race will be the Rocky Run Trail Run 5K on May 30th.  The course will follow some of the Middletown Trails that I have hiked on and blogged about in the past so that should be fun.  After my big PR yesterday I think I’ll just plan on having a good off-road experience and enjoying the scenery.