On December 1st Matt and I bought a charming little decorative sign that cheerfully proclaimed “LET IT SNOW!” We hung the sign in our kitchen and since then our town has received over 3 1/2 feet of snow, resulting in 5 snow days and 2 late openings and early closings at work.  Coincidence?  I think not.

Last Wednesday’s ice storm was the season’s most disruptive storm by far (as of today, at least!).  After a snow storm on Monday weighed down our trees with 7-8″ of heavy, wet snow, a wintry mix arrived late Tuesday night and coated everything in a thick layer of ice.  We lost power in the middle of the night (along with 620,000 other PECO customers!) and the only sounds we could hear when we woke up were the violent cracks of tree branches snapping under the weight of snow and ice.  Look at our sad, sad pine trees… 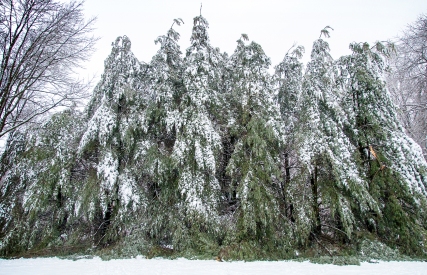 In addition to the extensive pine tree damage we also lost half a tree in our front yard as well as several large branches.  My mom’s yard fared even worse… Matt and I had to remove a tree from her driveway (before / after) in order to get to her house and upon our arrival we discovered her once-beautiful weeping willow tree had uprooted under the weight of the ice and was keeled over on its side in the snow.

It wasn’t all bad, though.  My mom and stepfather have a generator so our whole family ended up at their house for the day.  We spent our ice storm day chatting, drinking coffee, and completing a huge 1000 piece puzzle before enjoying a yummy dinner together.  On Wednesday night Matt and I received word from our neighbors that our power was back on (woohoo!!!) so after our day of fun we were able to go home and gratefully enjoy heat, running water, and internet.  🙂

Here are some photos that I took on Wednesday during the ice storm.  Brr… 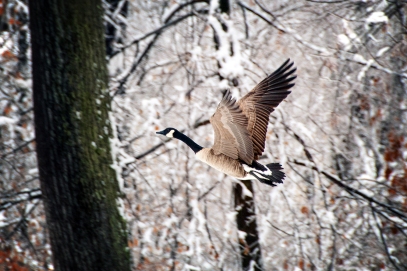 Goose across the ice

I disturbed this goose in my mom’s pond 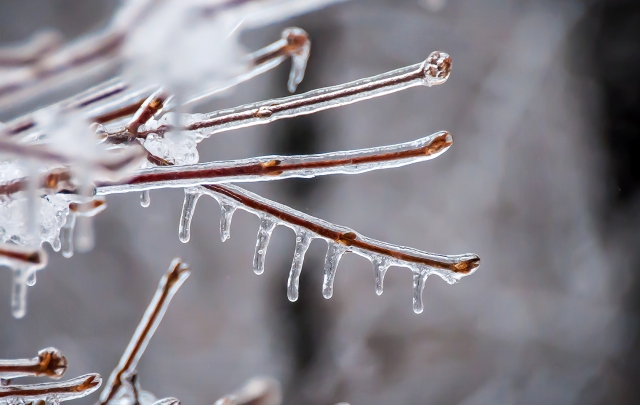 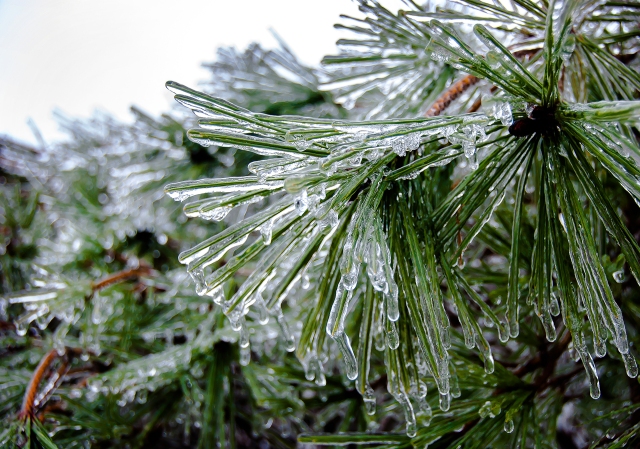 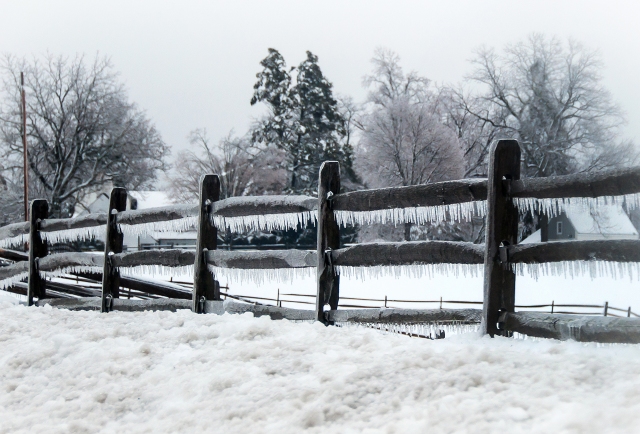 Matt and I contemplated taking down our Let It Snow sign today but decided to leave it up a little longer.  We’ll see if it’s still hanging in the kitchen after the storm that’s forecasted to hit us on Thursday…  8-12″ of snow!!!  What a winter!

Matt and I ran the second 5K in the Athlete’s Closet Winter Series this morning.  This race was special for two reasons… we had our first-ever spectators/cheering squad (my mom and stepfather) AND both of our brothers ran the race with us!!!  Here we are at the finish… my brother Billy (#167), Matt’s brother Dylan (#145), me, and Matt.  Yay for family running together! 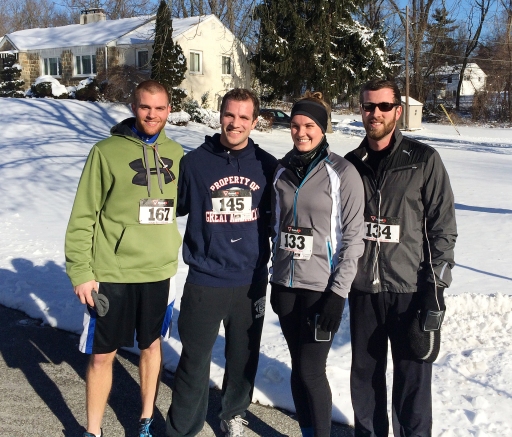 Billy was the first finisher of our group (15th overall) with Dylan (17th), Matt (20th) and me (23rd) close behind.  Matt’s time was 25:45 and mine was 26:19… much slower than usual but we had a good excuse… the roads were partially covered in snow and it was really, really cold out.  It was a mere 1°F when we arrived at the event.  ONE DEGREE!!!  By the time the race actually started it had probably warmed up to around 10° but that’s still pretty chilly!

I knew it was going to be cold so I tried to plan my clothing accordingly.  I was wearing SmartWool compression socks, Athleta’s Relay Tights, a thin Under Armour Twisted Tech T-shirt, Athleta’s Queen’s Luscious super-soft long-sleeve half zip, the Sugoi Firewall 180 Jacket, a head band, lightweight gloves, and a neck warmer from my mom that was made out of some sort of super-breathable tech material.  All of that layering paid off because I felt good at the start line and got just hot enough during the race to unzip my jacket and long-sleeved shirt and put my gloves in my pockets.  Oddly my toes went numb for the first mile or so but I’m not sure if that was from the cold or from my compression socks… I’ve never run in these socks before so I’ll have to do some investigating to figure out what was going on!

Today’s 3.1 mile course took us on the same route as the Athlete’s Closet December 5K.  It was fairly hilly with a few big, slippery uphills towards the end of the race.  I tracked the run on my iPhone with Runkeeper as usual but unfortunately I couldn’t get the “start” button to work at the beginning of the race.  I ended up running the first several hundred yards looking at my armband trying in vain to push the stupid button with my “iPhone friendly” gloves (which, for the record, had been working fine up to that point!).  I finally got it to work about .1 into the race after taking one glove off and licking my finger before tapping the phone screen  Jeez!  Maybe it was too cold out?  All of this excitement resulted in my splits being a little messed up since I had to manually edit the course distance in Runkeeper afterwards.  Oh well! 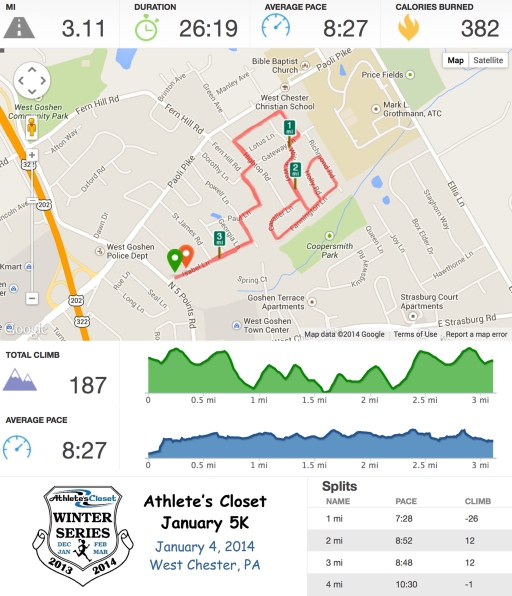 Overall today was chilly and not quite as fast as I was hoping for, but it was really fun to have our brothers running with us and to have our very own spectators.  I figure if our family was able to survive today’s frigid temperatures they can survive anything!  Hopefully they will join us again for the next 5K of the Winter Series on February 1st!  🙂