This morning it was my turn to take Piper out.  Usually I have no trouble falling back to sleep after our chilly 7AM tour around the yard, but today I felt especially awake and decided to catch up on some long overdue blog reading.  I scrolled through my WordPress “Reader” for nearly an hour and thoroughly enjoyed reviewing the many year end recaps and ambitious 2016 resolution posts that bloggers I follow wrote 2+ weeks ago.

All of this inspirational reading served to remind me that I’ve been terrible about updating my blog lately.  I’m not sure why that is,* but whatever the case, I’m not going to beat myself up about it.  The whole point of my blog is to document the races, foods, trips and other events that I’m enjoying and if nothing “blog-worthy” happens for a few weeks, so be it!

(*OK, I’ll confess: My recent lack of posts is almost certainly because we’re binge-watching Sons of Anarchy.  It’s so riveting that I can’t multi-task and blog while watching it!)

Although it’s January 16th, my morning reading has inspired me to offer my own 2015 wrap up and 2016 goals.  Without further ado, here I go!

2015 was the year of the mini-vacation.  Matt and I traveled to 10 states and spent 28 nights away from home.  Piper joined us on several trips and spent the other nights slumber-partying at my mom’s house with her best friend, Hershey the Chocolate Lab.  Matt and I primarily traveled within driving distance, but also flew to Vegas for work at the beginning of the year and then to California for an epic drive up the Pacific Coast Highway in October.

Since 2015 marked another year of my ongoing mile-a-day streak, I began nearly all of my out-of-town mornings with a run.  This was a great way to feel good on vacation AND get a feel for my surroundings, regardless of whether I was in a big city, little town, or remote forest.  In 2015 I ran in places as diverse as Las Vegas (NV), Cape Charles (VA), Bethany Beach (DE), Avon-by-the-Sea (NJ), Skaneateles (NY), Promised Land (PA), Dorset (VT), and Carmel (CA).

And about that streak… I’ve now been running, hiking, or otherwise moving my body a mile a day every day since July 2013. My daily miles are now a completely routine part of my life and are just something I do, like eating or brushing my teeth.  As of today, I’ve been streaking for 930 days and 4,380.5 miles with no plans to stop anytime soon.

4 miles on the treadmill with Coach Piper (November, Day 872)

Looking ahead to 2016, I hope to continue many of the same habits, including trying to pack as many mini-getaways into our busy lives as possible.  Matt and I already have a weekend trip to Sedona, AZ planned (I am SO EXCITED!!) and I wouldn’t be surprised if we find ourselves in California, Kentucky and multiple states on the east coast at some point later this year.

One thing that will be changing for 2016 will be my total number of races.  I’m not opposed to racing 25+ times in a year, but I know I’m going to miss at least 7 of the races I enjoyed last year due to scheduling conflicts. (For example, my brother decided to get married the night before the Broad Street Run!! But I forgive him. 😀)  I’ll also miss the Athlete’s Closet Winter Series this year as the series was cancelled.  Oh well!  Racing is fun but isn’t everything… maybe I can use that time to get some extra miles in with Piper!

Running with Piper is one of my biggest goals for 2016.  She was too young to really do many pavement miles last year, plus she pulled on the leash like a maniac which made runs much less pleasant than they should have been.  In late December I finally broke down and bought her a “Gentle Leader” head collar to put an end to her pulling and so far it has worked wonders.  We still have lots of training to do, but I look forward to lots of happy runs with my little GSP this year.

My final goal for 2016 is a simple one… improve my CORE STRENGTH!  In 2015 I did exactly zero strength work, but I’m fully aware that if my abs and arms are stronger I will be a better runner, even if I don’t change a thing about how I actually train to run.

Fortunately for me, core strengthening is a goal that I can absolutely accomplish from the comfort of my living room floor while watching Sons of Anarchy.   Otherwise core strength, like my nonexistent blog posts, might never happen!

Oh, and in case you were wondering, Piper resolves not to dig in my garden in 2016… 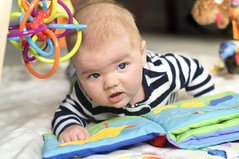