Happy Friday! Check out this photo of Bailey… I entered it in a photo contest and, if we win, Bailey will get to have a professional photo shoot and be the “Cover Dog” of Delmarva Unleashed magazine!  If you want to help Bailey in the contest please click on the photo.  This will take you directly to the Facebook version of the photo where you can “LIKE” it to vote!  Voting ends February 21, 2013. 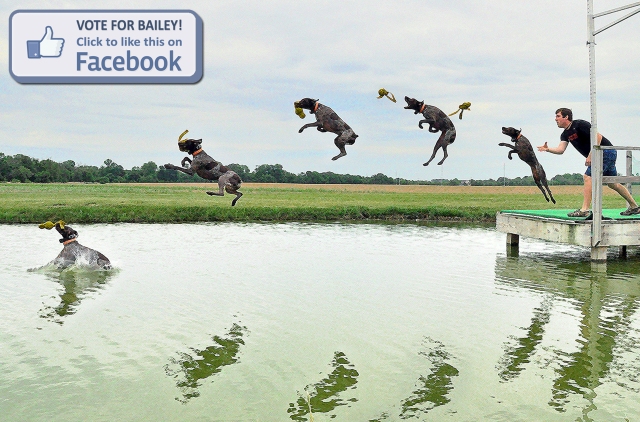 The above photo shows Bailey in Dover, Delaware at a Delmarva Dockdogs practice.  I created the image by combining five photographs of the same jump together in Photoshop.  I especially like this image because you get to see five Baileys in the air and five Bailey reflections in the water.  She also caught her yellow wubba like a pro.  🙂

Over the years I have created several sequences of Bailey competing in dock diving events.  Here are a few of my favorites!  (Click the photo to view the high-res version.) 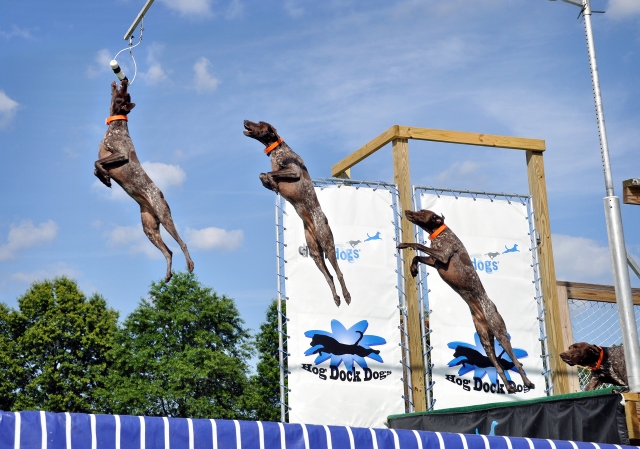 Bailey at the June Bloom event last summer.  Not the prettiest grab but she got it! (2012) 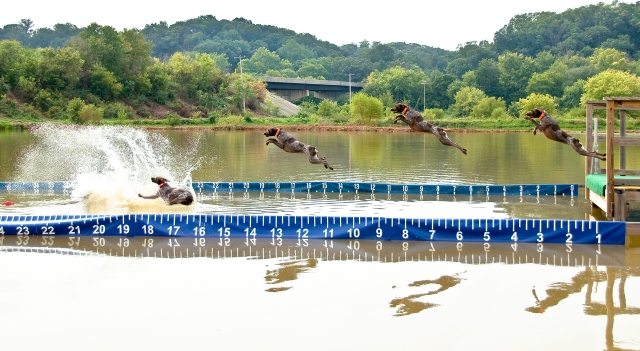 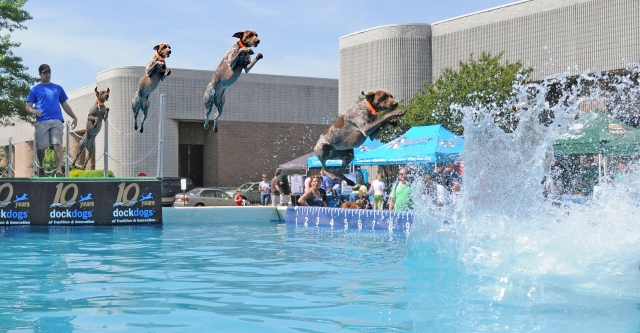 Bailey makes a splash at Care A Lot in Virginia Beach. (2010) 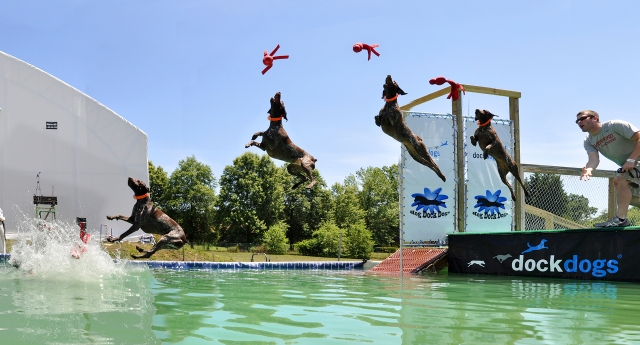 Following her red wubba through the air at the June Bloom event. (2012) 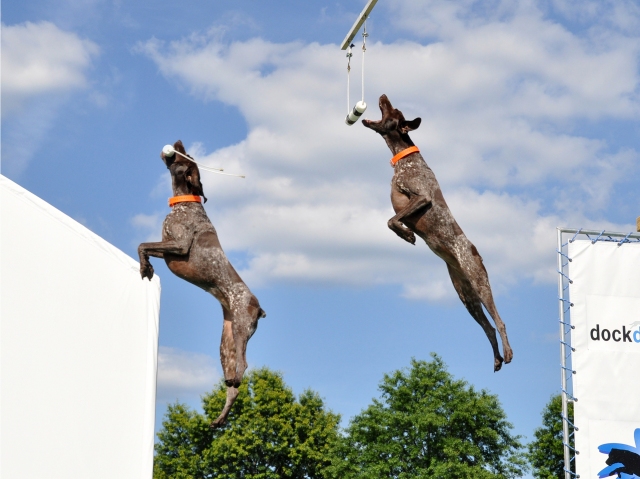 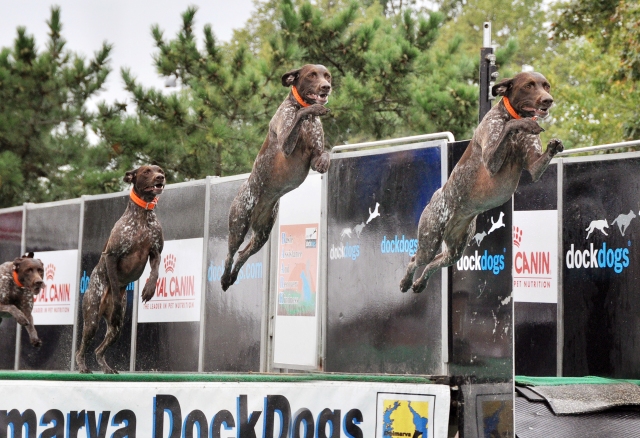 Last but not least, a close up of Bailey’s expression as she takes off.
She’s all business! (2011)

Do you like any of the above photos?  Tell me about it in the comments section.  And please don’t forget to Vote for Bailey in the “Cover Dog” photo contest!  Thank you!!!  🙂

We had a BLAST at DockDogs World Championships!! This invite-only event was basically an awesome dog convention because throughout the weekend we found ourselves continuously bumping into old friends, catching glimpses (or elevator rides!) with reigning World Champions, and meeting new friends (and dogs!) that we’d only ever read about on Facebook. Cool! 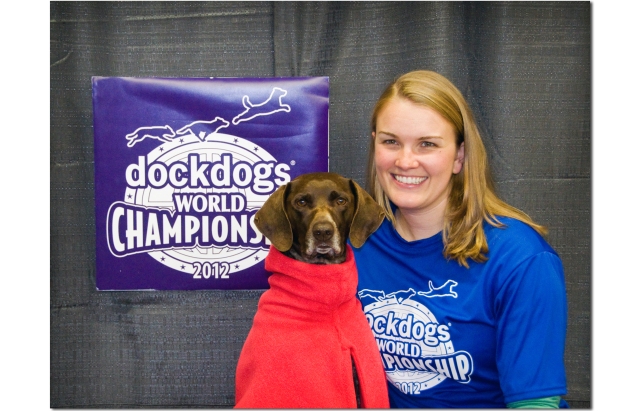 That’s me posing with Bailey. Check out her super-warm “Trover” jacket… it’s like a big red doggie robe!

Much to our relief Bailey enthusiastically jumped during both of her qualifying rounds! We had been worried that she might decide that the water was a bit too chilly and embarrass us by stopping on the dock in front of the big crowds but luckily she brought her ‘A’ game and jumped without hesitation. She wasn’t actually competitive score-wise — 20’8″ was her longest jump — but we had fun nevertheless!

One of my favorite things about Worlds was seeing so many DockDog “Celebrities” in one place. We got to watch all of these current World Record holders in action:

Yeager actually broke his own indoor EV world record on Friday night with an 8’3″ grab. Yeager competes as part of GoTeam21, an organization that raises awareness for children with Down syndrome. You can check out Yeager online here: http://goteam21.org/. 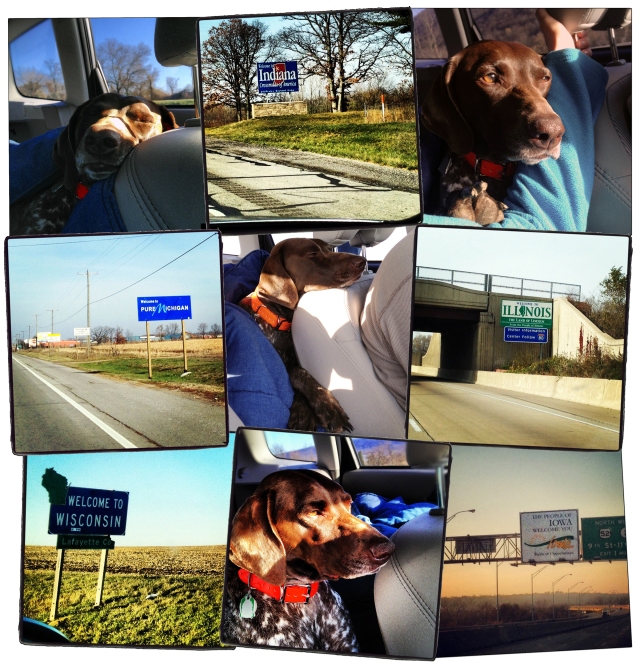 The long road trip to and from Dubuque, Iowa wasn’t as bad as I thought it would be. We stopped in Ohio for the night on the way out and made it to Dubuque for the official competitor check-in by Thursday afternoon. I wanted to go through as many states as possible so we made a slight detour into Michigan and then took a route that brought us through Wisconsin on our way into Iowa. Bailey has now visited 13 states! In order they are NJ, PA, DE, MD, NY, VA, OH, CT, IN, MI, IL, WI, IA (just in case you care…).

When it came time to drive home, we left early on Sunday morning and Matt drove us the ENTIRE way home (15 1/2 hours!) with only a few short stops. I helped out by “navigating” and overseeing the selection of numerous NPR podcasts. After listening to that many hours of current events I now feel like an expert on the Israeli-Hamas conflict, the Fiscal Cliff, and a variety of other issues. 🙂 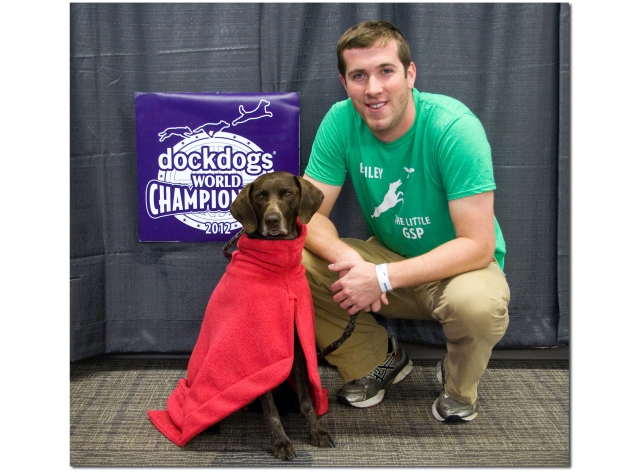 Matt handled Bailey AND did all of the driving on our 1895 mile round trip… nice work!

I’m very thankful that we got a chance to compete at Worlds and we’re already looking forward to the start of the 2013 season next Spring! Congratulations to all of our friends that made finals (and a BIG congrats to Carlyn and Max from Chesapeake DockDogs for their Big Air Junior win!!) and I hope that everyone had safe trips home. 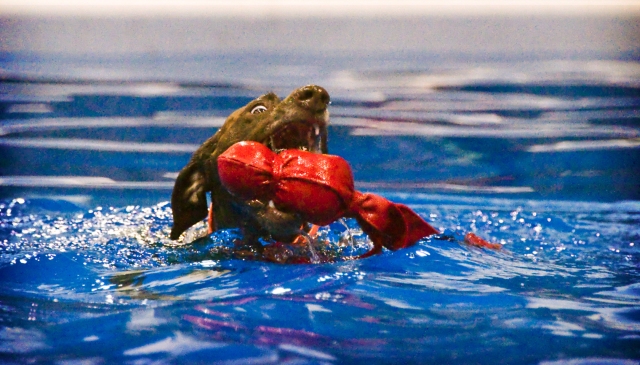 Happy, happy birthday to my sweet Piper girl. Piper, you are so patient with your baby sister and she absolutely adores you. “Dog” and “bark” were some of her first words and she perks up whenever she hears your name. Thank you for being such a wonderful pup. 🥳🎈🎉
“Get with the program, kid. If we pose quietly we get treats!!” ❤️🐶
Snow day snooze 😴
Just let me know when it’s time for presents.
Merry Christmas! Piper has a new orange collar and a @mybenebone Zaggler waiting for her under the tree this year. 🥳🎄
First snowstorm of the year means it’s time for Piper’s supercoat to make an appearance. I wish #Hurtta made a people version of this jacket. ❄️
Baby Kenzie is holding on because she now knows Piper could launch off the bench at any moment for a treat. (Luckily Kenz has good balance and her dad has great dad reflexes... so no babies were launched!)
Piper is keeping an eye on every delivery truck in the neighborhood. (She knows where the presents come from!)
Halloween Outtake 😂
Just a dog and her dog. 🧡🧡 Happy Halloween!! 🎃