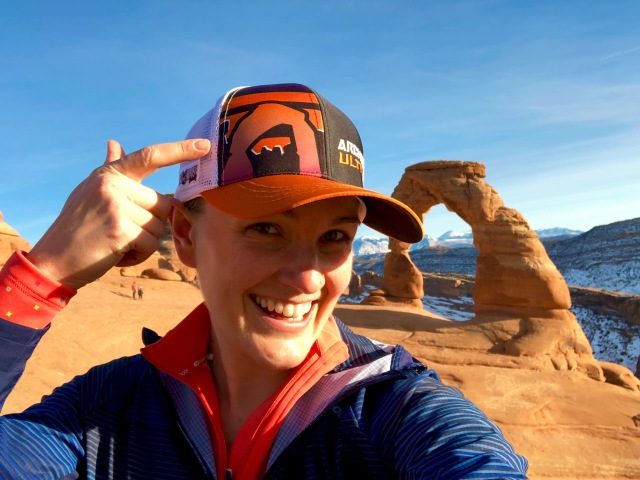 Every January Matt and I have a work trip in Las Vegas. After work ends on Friday, we take a long weekend adventure to somewhere within driving distance, like Zion, Sedona, or Temecula. This year’s destination? Moab, Utah. I’ll describe Moab in more detail in my next post, but suffice to say that there are some pretty awesome things to do in Moab for anyone who enjoys being outside, being active, and being rewarded with breathtaking landscapes.

I had already decided we were going to Moab and was doing some online research when I came across mention of the “Arches Ultra” trail race that would be taking place the Saturday we’d arrive in town. That’s cool, I thought, there will be lots of runners around. Then I clicked through to the race site and discovered that in addition to the “ultra” race distances of 50 mile, 50K and 13.1 miles, this event would also feature a shorter 9K trail race. That’s only 5.6 miles… I can do that!!

I immediately scrutinized our itinerary to figure out if it was even possible to get to Moab in time for the race’s 10AM start. If we retrieved our rental car in advance, left Las Vegas immediately when work ended at 5PM (pacific time), got dinner on the road, and drove until 11PM (mountain time) Friday night, we could spend the night in Richfield, UT. Then we’d just need to drive 2 1/2 hours on Saturday morning to get to Moab. Totally doable! 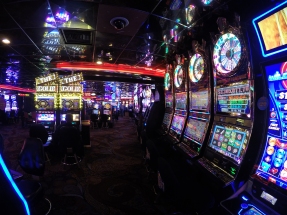 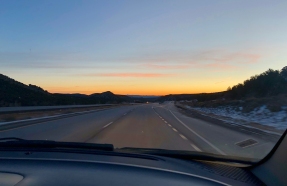 Thankfully our long journey northeast went according to plan and Matt and I arrived at the race at 9:20AM. The ultra runners had started their longer races hours earlier (those 50 milers had to finish before dark!) so the start area was quiet and I had time to take in the sights. A huge cliff rose up out of the desert just to the north. The sky was deep blue and the ground was a beautiful red that reminded me of Sedona. The weather was perfect – low-30s and sunny. What a great day to run a trail race in Utah! 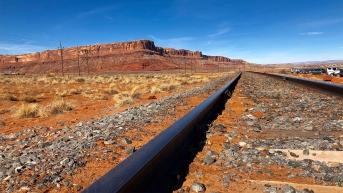 Tracks for the Potash Train

I lined up with 96 other runners at 10AM. I felt a little out of my league as I listened to people around me chatting about how they had come from Colorado and Arizona for this race. I was positive that their western heritage automatically made them much better equipped to run an off-road race at 4600′ elevation, but that was OK. I positioned myself towards the back of the pack and prepared to have a blast running in Utah.

It quickly become clear that I had started way too far back. As soon as I carefully crossed over the cattle guard near the start (that could be a major ankle buster!) I began working my way around the crowd. Finally the field thinned out and I found myself cruising along with another woman. We chatted as we ran and I learned that her name was Kristen and that she was from Arizona. (This is one of the great things about trail races; everyone talks to one another and is so friendly!!)

Shortly after mile 2 the course veered off onto an actual trail (we had been on a paved bike path up until this point) and I let Kristen (the Experienced Westerner!) take the lead. I tucked in behind her as we weaved our way up, down and around hills and rocks. At one point I felt like a slalom skier as the trail switchbacked around the desert. Fun!

After a few twisty miles we were back on the paved trail, making a beeline to the finish. With less than a mile to go, I realized that I had the energy to pick up the pace and I focused on Kristen, who was still within reach ahead of me. Kristen must have had the same thought, because together we BOTH picked up our paces and zoomed towards the finish. It quickly became clear that I wouldn’t be able to catch her, but I kept up my speed, pausing only slightly to one-step over the cattle guard (Matt said I ‘took it well’ compared to some!) before sprinting through the finish chute. Utah trail race complete!

I collected my medal (I had forgotten there were medals!) and awaited the results. Because I had started so far back I had no idea how many runners were ahead of me. Imagine my surprise when the results were posted and I was 10th OVERALL!!! By my count, I was also the 4th woman to cross the line, but later I discovered that the official results show that I was actually 3rd female overall. Cool!!! 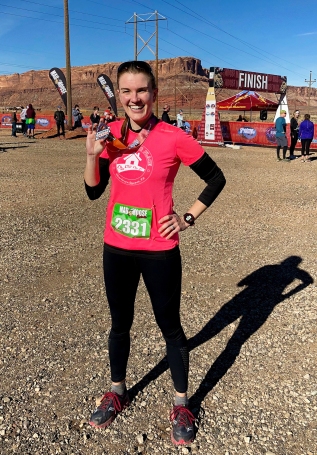 Kicking the weekend off with a trail race was a great introduction to Moab. The race was well organized, the other runners (especially Kristen from Arizona!) were super friendly, and there was great race swag. I LOVE my new Arches Ultra trucker hat and I wore it constantly for the remainder of our time in Moab. Apparently many of the other runners felt the same way… I kept bumping into other ‘tourists’ wearing The Hat for the rest of the weekend and it was fun to compare race stories. Granted, everyone I met had raced at least twice as far as I did, but, no worries, I ran an “ultra,” too!

More on our weekend in Moab coming up next!

3 thoughts on “I ran an Ultra! OK, not really, but it WAS a Trail Race in Utah.”