Back in November Matt and I were pleasantly surprised when we made Pozole Verde, a Mexican-style pork stew with cilantro, tomatillos and jalapeños.  The Verde recipe appeared as a riff on the chili-based Pozole Rojo in our The New Best Recipe cookbook so we immediately vowed to make the Rojo as soon as we got the chance.  Well, that chance came yesterday afternoon and the resulting “red” stew with pork, hominy and ancho chilis was wonderful!

This hearty stew is warm, flavorful, and perfect for a cold winter evening.  It’s fairly healthy and you can top it with a wide variety of bright, crisp garnishes including cilantro, avocado, radishes, onion, and, Matt’s favorite, quesco fresco.  Yum! 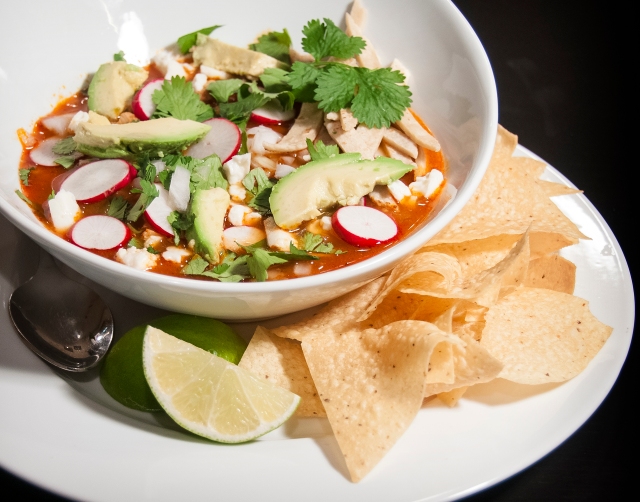 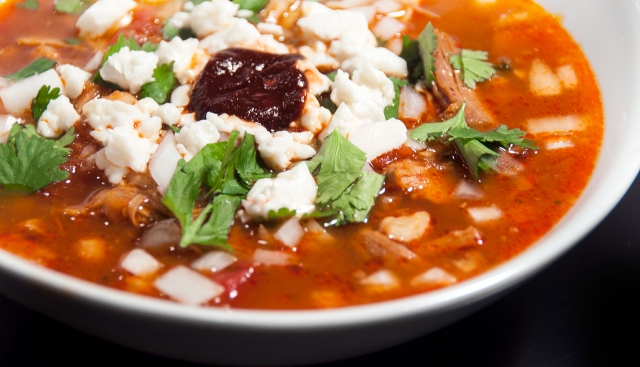 Directions:
Trim excess fat off of the pork roast and cut along the muscle into several large pieces (approx. 8-9 pieces for a 4 lb. roast). Reserve the bones. Season the pork generously with salt and pepper. Heat the oil in a large (8 qt.) oven-proof dutch oven over medium heat. Add the  onions and 1/2 teaspoon salt. Cook, stirring frequently, for approximately 4 minutes until the onions have softened and released moisture. Stir in the garlic and cook for 30 seconds.

Add the pork and bones to the onion mixture and stir frequently for approximately 8 minutes until the outside of the meat is no longer pink. Add the chicken broth, diced tomatoes, oregano and another 1/2 teaspoon salt and increase the heat to high. Bring the mixture to a simmer on the stove, then cover and cook in a preheated 300°F oven for 2 hours.

Meanwhile, soak the ancho chilis in 1 1/2 cups of boiling water for 20 minutes.  (I microwaved the water in a pyrex measuring cup and soaked the chilis in the cup — no need to keep the water boiling for 20 minutes.)  Transfer the chilis and soaking liquid to a blender and puree.  Pour the blended chilis through a strainer; you should end up with about one cup of puree.

After 2 hours, remove the pork mixture from the oven and return to the stove. Remove the pork and bones and place on a plate to cool. Stir the rinsed hominy and 3/4 cup of the pureed chilis into the broth mixture and bring to a simmer. Cook, covered, for 30 minutes to allow the flavors to meld.

Once the pork is cool, shred the pork with your fingers (or with two forks). Pull any remaining meat off of the bones and discard the bones. Stir the shredded meat into the stew and simmer for approximately 10 minutes until the meat is hot. Serve in a large bowl with a liberal helping of the garnishes on top.