After (finally!) finishing our Thanksgiving leftovers Matt and I decided that we wanted to make a meal that featured tons of flavor, fresh veggies, and oh… NOT turkey! 🙂 We pulled out our trusty The New Best Recipe cookbook and found Pozole waiting for us in the stews chapter. Pozole is a traditional Mexican soup made with shredded pork and hominy (a type of corn) and it is DELICIOUS! We enjoyed our Pozole for dinner on Sunday and then happily ate it for lunch the next four days (and I’m still not tired of it!).

There are different types of Pozole including Rojo (made with chiles) and Blanco (made without any added sauces). This recipe is for Pozole Verde which includes a liberal amount of blended tomatillos, jalapeños, and cilantro. Make sure not to skimp on the garnishes – although Matt preferred the Pozole without any added flavors, I really enjoyed the freshness that the chopped onion, avocado, radish and tomato added to the finished dish! 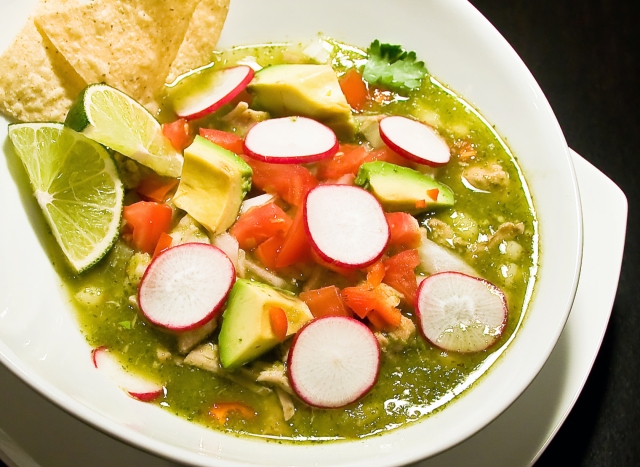 Directions:
Trim excess fat off of the pork roast and cut along the muscle into several large pieces (approx. 8-9 pieces for a 4 lb. roast). Reserve the bones. Season the pork generously with salt and pepper. Heat the oil in a large (8 qt.) oven-proof dutch oven over medium heat. Add the 2 coarsely chopped onions and 1/2 teaspoon salt. Cook, stirring frequently, for approximately 4 minutes until the onions have softened and released moisture. Stir in the garlic and cook for 30 seconds.

Add the pork and bones to the onion mixture and stir frequently for approximately 8 minutes until the outside of the meat is no longer pink. Add the chicken broth and another 1/2 teaspoon salt and increase the heat to high. Bring the mixture to a simmer on the stove, then cover and cook in a preheated 300°F oven for 2 hours.

Meanwhile, place the tomatillos, jalapeños, water, and the quartered 1/2 onion in a blender. Blend for 2-3 minutes until smooth. Add the cilantro and blend for another 2 minutes. Set this brilliant green mixture aside.

Pozole Verde with Pork and White Hominy (before we added garnishes)

After 2 hours, remove the dutch oven from the oven and return to the stove. Remove the pork and bones and place on a plate to cool. Stir the rinsed hominy into the broth mixture and bring to a simmer. Cook, covered, for 30 minutes to allow the flavors to meld.

Once the pork is cool, shred the pork with your fingers (or with two forks). Pull any remaining meat off of the bones and discard the bones. Stir the shredded meat and the green tomatillo mixture into the stew and simmer for approximately 10 minutes until the meat is hot. Serve in a large bowl with a liberal helping of the garnishes on top. 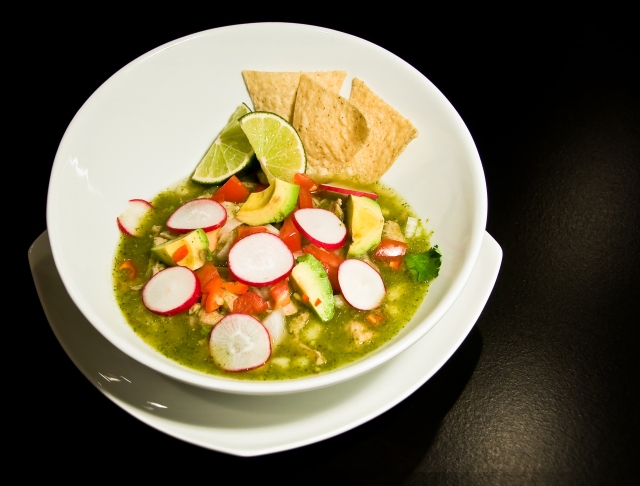 Liked this Pozole Verde recipe?  You may also enjoy my post on Pozole Rojo!