This race almost didn’t happen. And no, it wasn’t because our area was hit with an ice storm the morning the race was originally scheduled for. That was easy to predict and the race organizers gave everyone plenty of notice when they (wisely) decided to postpone the race by a day. No, the reason I almost did not start today’s Inaugural Delaware Downhill 5K was that my CAR decided that it did not want to start!!

I think the race organizers made the right call by not holding the race Saturday.

As usual, I had my pre-race morning planned down to the minute. I woke up at 5:45, let Piper out, had a light breakfast of coffee, cereal, and a clementine, let Piper in, wiped the mud off Piper’s feet and belly for 3+ minutes (that I had not planned for, ha!), then foam rolled, stretched and read for a while before waking Matt up. The race started at 9:45 so I figured leaving the house at 8:25 sharp would give me plenty of time to get there and get warmed up. Until we went out to our (only) car, turned the key in the ignition, and the engine wouldn’t start!!

Let me back up and tell you about this race. It’s a DOWNHILL, point-to-point course with 230+ feet of elevation loss, meaning that a PR was going to be extremely possible. The race t-shirt was billed as an ugly sweater tech T (awesome), and today’s weather was PERFECT racing weather — mid-50s and overcast. I really, really wanted to run this race, so imagine how sad I was as Matt and I sat in the cold garage, paging through the car manual and trying to figure out what was wrong.

While Matt checked the car battery connections under the hood I posted a defeated message on my run club’s facebook page. No downhill race for me today, boo. But then Matt tried the car again (using the “two foot” method, apparently?) and after many terrible-sounding cranks IT STARTED!!! It was 8:55 and we had a 40 minute drive ahead of us.

We zoomed down to Delaware in record time. Matt dropped me off right by the start and I found my run club friends almost immediately. They had my bib and ugly sweater shirt for me (thanks, Lysa!!) and within minutes of arriving on site I was standing at the start line, utterly unwarmed-up but very grateful to be there.

Going into this race, my PR was 23:17, which is an average page of 7:29 per mile. With this in mind I figured I should start out fast but not too aggressively, maybe with a 7:20 split. But then the race started and I was swept up by the festive runners in costumes and gradual, wonderful downhill, and before I knew it mile one was over in 6:59. So much for my plan!

Although this course is net downhill, mile 2 was mostly flat and even had some short uphill sections. After my blazing fast first mile I was not expecting this lack of descent and I struggled through this mile just a bit. But I knew that there had to be significant elevation loss waiting for me in the final mile so I wasn’t too worried when the middle mile beeped by in 7:43.

Next to the Brandywine River after the race.

At the start of mile 3 I ran past a volunteer who helpfully told me “It’s all downhill from here.” He was right! The course turned into the parks along the Brandywine and before I knew it there was just a half mile separating me from a new PR. I pushed hard down the final hill and spotted the finish with several hundred yards to go. Mile 3 was over in 7:18, a good improvement over my second mile.

I knew I was on track to PR, but I thought I was going to be much closer to 23:00 and really wanted to break 23 if possible. I flew through the homestretch and crossed the line with an official chip time of 22:38… a 39 second PR!!!

I had never seen a “PR Bell” in person, but, as luck would have it, there was a bell at the Delaware Downhill! (I guess this wasn’t luck… the organizers probably knew that there would be a lot of personal records on their PR-friendly course.) I collected my 3rd place age group award and happily rang the bell. Although my morning didn’t quite go as planned, I am very thankful that I was able to make it to the race and get the chance earn a new PR on this super fast course. 22:38 is going to be really hard to beat on a regular course!

As for the car, we still don’t know what was wrong. Matt kept it idling the whole time we were in Delaware and only turned it off (and back on again, just to see what it would do) when we were safely home after the race. We’ll see how it’s doing when we head out to Matt’s parents’ house for dinner tonight. Wish us luck!

13 thoughts on “A New PR at the Delaware Downhill 5K!” 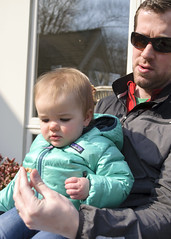