Piper has had a fantastic summer so far, with multiple trips to the pool, plenty of playtime with her buddy Hershey, and hours of outdoor ‘hunting’ in our backyard. Here’s a recap of last month in photos. Enjoy!

In June when Matt and I were in Bethany Beach Piper finally learned how to swim in a pool! Prior to this she was scared to step off of the top stair, but when we returned from the beach Piper was swimming around like a little fish. A really really happy spotted fish with cute white whiskers!! 😄

Piper still hasn’t mastered her pool entry but she’s working on it. She sort of slithers off the side and closes her eyes as she hits the water. Hopefully we’ll get her jumping in like a normal dog by the end of the summer!

Hershey usually chooses not to go in the pool. Instead, she patiently waits for Piper to retrieve the wubba and then immediately tries to steal it the moment Piper emerges from the water. These dogs crack me up.

When Piper isn’t paddling around Hershey’s pool she’s usually stalking something in our backyard. Over the past month she has become much more interested in chipmunks, groundhogs, toads and birds. Apparently there are nests with baby birds all around our patio because she has been spending every afternoon with her face wedged in the bushes and her tail wagging at top speed.

Tip of the month: it is NOT a good sign when your puppy greets you at the back door looking like this!! This happened last Wednesday, just as we were about to go out for dinner. Piper was all “What? Why can’t I just come inside and lie on the carpet?!?” 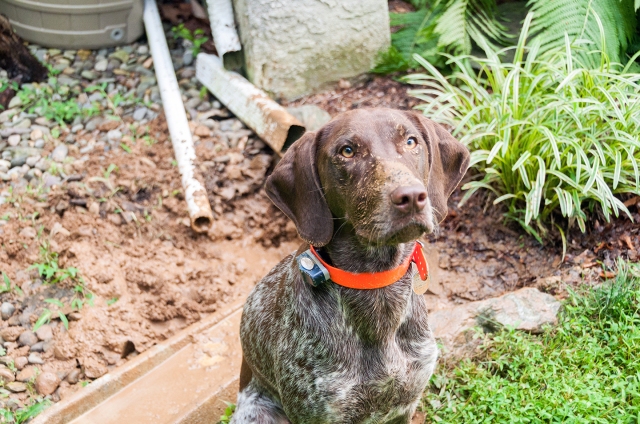 We surveyed the yard and discovered a huge muddy hole at the front corner of our house. It appears that a chipmunk foolishly attempted to hide from Piper by taking cover in the gutter. (This has happened before.) Piper “defended” our house by attacking the gutter and then proceeded to dig a moat around the gutter to keep future intruders at bay… or at least that’s what she’s claiming!!

Piper was REALLY muddy. Fortunately she is easy to bathe.  😄

In late June Piper won a “summer dog” Instagram photo contest with this photo. Her prize was a set of three split elk antlers from RidgeRunner Antler Chews in Colorado. I wanted to take some photos to thank RidgeRunner so I hung up a white sheet and started playing around with my camera settings before actually giving Piper an antler. Piper didn’t know what was going on so she just gave me her best puppy eyes as she waited to find out what I was so excited about. 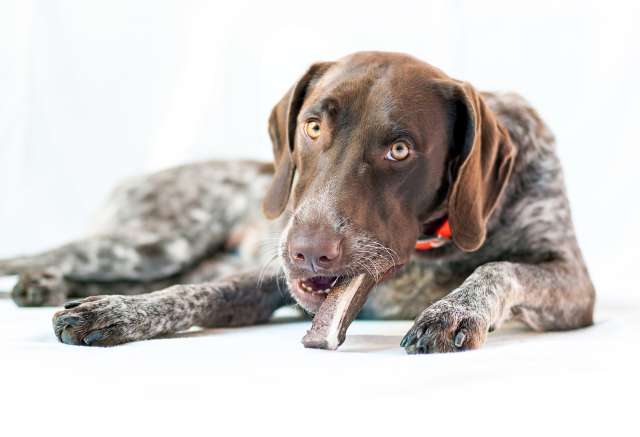 Piper figured out what the big deal was as soon as I handed her an antler. She LOVED it!! These antlers are fresh from the Rocky Mountains and have a thick layer of marrow that Piper went nuts over. She chewed and chewed for about 30 minutes while I snapped away.

If RidgeRunner or any antler company needs a puppy model to “taste test” their products, Piper volunteers!!!

This has been an excellent month for insta-contests. Piper won a second contest, this one for “Cute Puppy Eyes,” with the above photo. One of the prizes was a cool digital portrait of Piper’s winning shot, complements of @Puppy_Transit. They did such a great job! The other big prize is a custom dog bed with our choice of fabric from @LillyandAbbie. Piper has never had a new bed (she sleeps on hand-me-downs from Bailey) so I am really looking forward to receiving her custom bed in a few weeks!!

That’s about it for Piper’s month in review. Hopefully August will be even more fun!! (Although I could do without the mud hole in the front yard.) 😉 I’m pretty sure Piper will be happy as long as she gets to play in the pool!

What does your dog do for fun in the summer?
What’s your favorite photo of Piper from July?
I like the second antler shot and her awkward pool entry. 😎